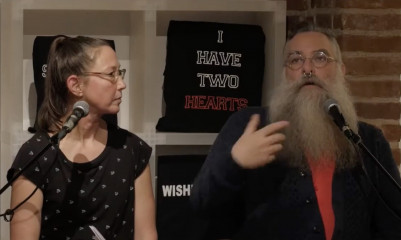 On January 6, 2018, artist Nayland Blake was in conversation with Terri C Smith on the occasion of the group exhibition “I hear it everywhere I go,” curated by Smith.

Nayland Blake, who earned his MFA from the California Institute of the Arts in 1984, has exhibited his work internationally in solo and group exhibitions.  Interracial desire, same-sex love, and racial and sexual bigotry are recurrent themes in Blake’s sculptures, drawings, performances, and videos, which reflect his preoccupation with his own racial and sexual identities. Blake participated in the 1991 Whitney Biennial and the 1993 Venice Biennale. The Tang Teaching Museum and Art Gallery at Skidmore College, Saratoga Springs, New York, presented a survey of his performance-based work in 2003, and his work was the subject of a 2008 survey exhibition at Location One, New York. In 2012 Yerba Buena Arts Center in San Francisco presented a one-man exhibition entitled “Free!Love!Tool!Box!” and Blake was awarded a Guggenheim fellowship. Blake chairs the International Photography Center-Bard MFA program and lives and works in Brooklyn.

Blake’s work is on view in “I hear it everywhere I go,” a group exhibition curated by Terri C Smith.  The show’s curatorial premise was inspired by artist Cady Noland’s (b. 1956) writings on and statements about American life. During her career in the 1980s and 90s, Noland explored the American tendency to vent violent impulses through socially acceptable release valves such as figuratively “trashing” celebrities on the one hand and conning or preying on populations outside of dominant power structures – often in the name of entrepreneurship – on the other. Exhibiting artists are: Alex Bag, Michael Blake, Nayland Blake, Jen DeNike, Jonah Freeman & Justin Lowe, Rashid Johnson, Adam McEwen, Rodney McMillian, Tameka Norris, Cheryl Pope, Mikel Rouse, and Melissa Vandenberg.