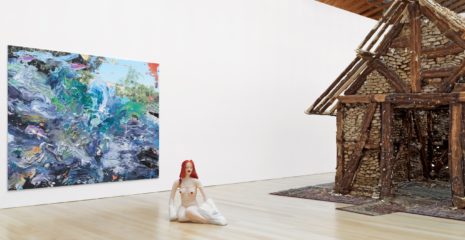 In Fischer’s works, the meaning lies within the very substances and processes of its making, whereby ideas become material and materials take on a life of their own. His subversive approach to art is often considered to be influenced by anti-art movements like Neo-Dada, Lost Art, or the Situationist International. The artist delights in the possibilities of surface, but even works that suggest his handmade touch turn out to have been produced through a range of digital processes in order to create the oddly surreal appearance of reality gone wrong.

URS FISCHER was born in Zurich and studied photography before turning his focus to making objects borrowed from everyday life. Born to two doctors as the second of two children in 1973, Fischer began his career in Switzerland where he studied photography at the Schule für Gestaltung, Zurich. He supported himself by working as a bouncer at Zurich night clubs and house parties. Fischer moved to Amsterdam in 1993, at the age of nineteen, and had his first solo show at a gallery in Zurich at age 22. He later lived in London, Los Angeles, and Berlin before moving to New York. Fischer’s current studio occupies a large warehouse on the waterfront in the Red Hook section of Brooklyn. Fischer is represented by galleries Gagosian and Sadie Coles HQ.

All galleries and facilities are wheelchair accessible

OPTIONAL
As the Art Engaged cohort grows, everyone looks forward to gathering post-event to share thoughts and see old and new friends.