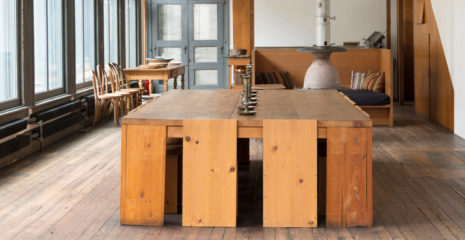 Join us for an FSW member visit to the Judd Foundation at Judd’s former Spring Street Studio at 1:00pm on Saturday, October 13th! According to the Foundation website, the 90-minute guided visit will “bring us in direct engagement with Donald Judd’s art and vision. Judd’s formerly private living and working space provides firsthand experience of Judd’s concept of permanent installation in downtown New York.”

Franklin Street Works Art Member Patrons get priority for sign up and individual members can sign up for waiting list. We have 25 spots so there will likely be room for all member levels. There is a Judd Foundation fee of $50 which should be paid to Franklin Street Works. For more information on how to sign up email info@franklinstreetworks.org. Sign up link forthcoming. Attendees are responsible for their own travel to NYC and the studio is located at 101 Spring St., New York, NY.

More on the Spring St. Judd studio from the Foundation Website:

In 1968, Judd purchased 101 Spring Street, a five story cast-iron building located at the corner of Spring Street and Mercer Street in New York City. Designed by Nicholas Whyte and constructed in 1870, it was the first building Judd owned and served as his New York residence and studio.

101 Spring Street is considered to be where Judd first developed the concept of permanent installation, which is now a hallmark of contemporary art as well as an inspiration for much of Judd’s work. Centered on the belief that the placement of a work of art was as critical to its understanding as the work itself, Judd’s first applications of this idea were realized in his installation of works throughout 101 Spring Street and later in Marfa, Texas. Judd’s installations of artworks, furniture, and museum-quality decorative objects strike a balance between respect for the historic nature of the landmark cast-iron building and his innovative approaches to architecture and design.