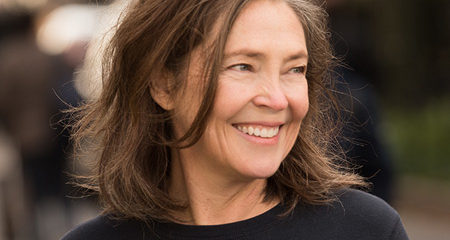 As part of Franklin Street Works summer garden program, “A Garden of Unseen Worlds,” we are bringing nationally known nature and food author Eugenia Bone to Stamford.  Eugenia will discuss topics from her book Microbia: A Journey Into the Unseen World Around You on SATURDAY, July 20 from 4:00 – 6:00 pm. This free public talk takes place at Franklin Street Works and includes a wine reception and book signing.

Bone became fascinated with microbes – lifeforms that can’t be seen with the naked eye – while researching mushrooms. She was especially interested in microbes that live inside plants, people and other organisms. After researching on her own, Bone realized she needed to study the topic in a university setting, enrolling in the Ecology, Evolution, and Environmental Biology program at Columbia University.

At Columbia, she learned that microbes are integral to understanding our own biology and are involved in all aspects of life. Her book, Microbia: A Journey Into the Unseen World Around You, serves as a microbiology primer for the layperson, surveying the role of microbes in nature, including the atmosphere, soil, plants, and ourselves.

Eugenia Bone, who lives in New York City and Western Colorado, is a nationally known nature and food writer and author. Her work has appeared in many magazines and newspapers, including The New York Times, The Wall Street Journal, Saveur, Food & Wine, and Gourmet. A member of the American Society of Science Writers and former presentient of the New York Mycological Society,  Eugenia has lectured widely, in venues like the Denver Botanical Garden and the New York Pubic Library, and been on radio and in podcasts many times, most recently, Wisconsin Public Radio’s “To The Best of Our Knowledge.”

Visit this LINK for garden event accessibility information or contact our Creative Director, Terri C Smith anytime at terri@franklinstreetworks.org or on her cell: 203-253-0404 M-F between noon and 5pm.