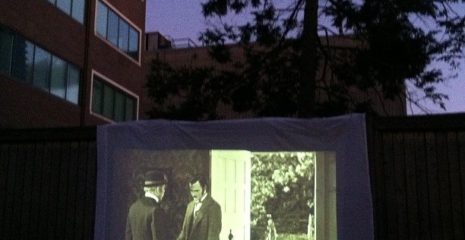 Franklin Street Works will present Buster Keaton’s critically acclaimed classic The General (1926), at 7:00 pm on September 5th. It was chosen by Erin Shea, a Stamford, Connecticut, resident and the curator of Darien Library’s film series, “Friday Night Features.” Ripe with foregrounded mistakes, the film will provide silent movie slapstick through brilliant physical humor. It’s no small feat to make a pie-in-the-face funny, but the physical humor replete in classic silent films still holds up today. In one of the most famous chase scenes in film history, pretty much everything goes wrong and it is a delight watching Keaton try to make up for it.

The movie is part of a series of three outdoor film screenings on Franklin Street Works’ back patio during the month of September! As summer comes to a close and days become shorter, what could be better than cozying up outside and enjoying free outdoor films right in downtown Stamford? Thursday night screenings will take place on September 5th, 12th, and 19th from 7:00 – 9:00 pm. The film choices are inspired by Franklin Street Works’ current exhibition, Kool-Aid Wino, which foregrounds mistakes and missteps in contemporary art. A film expert will curate each screening for these casual, social events, which also promise to bring various perspectives and create new connections to the exhibition. These free, public events will include special cocktails inspired by each film and snacks such as popcorn and hotdogs for an all-American movie experience.

Kool-Aid Wino is an exhibition that explores the foregrounding of mistakes and missteps in contemporary art practices and features works by Anne Carson, Choi Dachal, Frank Heath, Owen Land, Rotem Linial, James Merrill, Alice Miceli, Jenny Perlin, and Aki Sasamoto, as well as an ikat silk suzani textile made in the early twenties. By highlighting or even celebrating errors, the art in this show redeem flaws, accentuate their value, and open up myriad new possibilities.