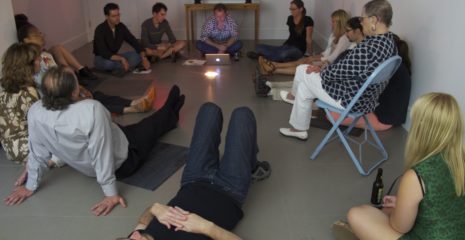 Kelly and Krejcarek will present and introduce several audio recordings in this public talk. Both artists have independently incorporated audio and field recordings into their practices and research over the last several years. They will share assorted examples with one another while discussing their content and the medium of sound at large. Kelly’s work explores time/space displacement through a collection of recordings that diverge from deep space murmurs to antiquated baseball commentary. Krejcarek has recently returned from Bolivia where he chronicled two-and-a-half months of unusual occurrences in over fifty field recordings for a project titled “El Otro,” which the artist describes on the project’s website as “audio recordings habitually sent from the peculiar country of Bolivia”. It was played on a loop at the Franklin Street Works café during These Transitional Spaces, accompanying sandwich and salad enjoyment with the sounds of everything from an amateur band playing AC/DC covers to bird calls to melodic funeral music.

Seth Kelly: Working in sculpture, drawing, and performance, Seth Kelly has exhibited widely since receiving his BFA from the School of Visual Arts in 1995.  Venues have included New York galleries PPOW and Marianne Boesky as well as the Greater New York exhibition at P.S.1 in Long Island City. His work has been covered in Art in America, the New York Times and the Brooklyn Rail. Recently, Kelly began curating as well, organizing “The Audio Show” at Friedrich Petzel Gallery in 2009.

Karsten Krejcarek: New York-based artist Karsten Krejcarek is a sculptor, photographer, and video maker.  Karsten’s work is concentrated on esoteric narrative, mystical symbolism and natural landscape. In the recent past, Karsten participated in ceremonial, unworldly and magic plant rituals with a shamanistic healer in the jungles of the Upper Amazon. It was during this time in the forest that he expanded upon ideas of multiplicity, telepathy, and symbiotic relationships between nature and the unconscious—concepts that have largely influenced his practice and informed the narrative structure of his recent work. Karsten received a MFA from Columbia University in 2000, is an adjunct faculty member of New York University, and has regularly exhibited his work over the last twelve years.