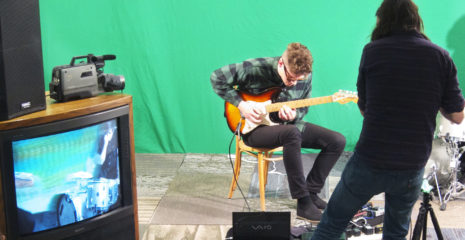 Franklin Street Works is excited to announce that E.S.P. TV, (http://www.esptvnyc.com/) an analog-based broadcast group in New York City, is taping their latest episode at our space Saturday, November 10, from 3-7 pm. The free, public event will include experimental sound, video, and performance artists from New York and Connecticut. The episode will be filmed in front of a live, studio audience and is slated to air on cable access stations in Fairfield County and/or Manhattan. Please join us for this unique opportunity to be part of the E.S.P.TV   audience this Saturday night! The café will be open until 5:00pm during filming, but audience members are welcome to hang out until the performance has ended. Following the event, stay tuned for air times, which will be posted on Franklin Street Works’ website and social media!

Performing artists include: Lea Bertucci; Brooklyn-based band The Dreebs; artist/comedian Heather Guertin; Patrick Higgins (Z’s), with videos by LOGAN OWLBEEMOTH and more, including a handful of collaboratively inclined artists and musicians from the region.

Formed in 2011, E.S.P. TV opened a space in Williamsburg during the summer of 2012. That space serves as a locale for the production of their show and regular screenings, events, and performances. Tapings of E.S.P. TV are in front of an audience with live green-screening, signal manipulation and analog video mixing. The entire night is recorded to VHS and edited into half hour episodes for airing on cable TV in New York City. Many are filmed in a variety of locations ranging from living rooms in Brooklyn, to alternatives spaces around the world. E.S.P. TV episodes are broadcasted Tuesdays at 10pm on MNN4, TW Channel 67, NYC and www.mnn.org.

The E.S.P. TV shoot is one of several events and off-site artworks created as part of Franklin Street Works’ current exhibition, Working Alternatives: Breaking Bread, Art Broadcasting and Collective Action. The E.S.P. TV taping is part of curator Mackenzie Schneider’s “Art Broadcasting” segment. In “Art Broadcasting,” Schneider examines artists using media such as radio, television, and newspapers as alternative venues for presenting work. E.S.P. TV is a contemporary example how artists use broadcasting as a way to share art with the larger public.