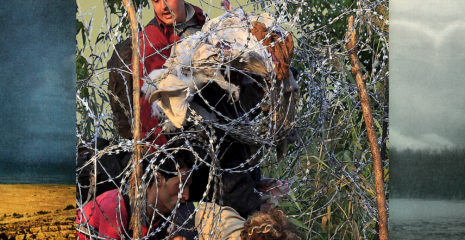 Artist Sherry Millner will discuss the origins and implications of her recent media works concentrated on migrant struggles and anarchist resistance to technologies of confinement. This continuing series of three-panel montages grew out of on-site research and activist support of migrants, uprooted and displaced from their homes in Syria, Iraq, Afghanistan, and across Northern and Western Africa, who are attempting to cross into Fortress Europe. Each triptych features a news-sourced image of migrants in jeopardized struggle or resistance, at borders enforced by barbed or razor wire, or en route in starkly overburdened flimsy vessels crossing the sea.  These images—altered, distorted, reframed–are usually bordered left and right by a deliberately disjunctive image, also transformed, drawn from the artist’s extensive collection. In her talk, Millner will place these recent works within the larger context of her practice, situating the triptych series into almost five decades of work.

Millner’s work has been exhibited at film/video festivals throughout the U.S. Europe, Australia, and Asia, at major museum exhibitions, including two Whitney Biennials, and the current Thessaloniki Biennial and is distributed by Video Databank. She has produced a series of installations depicting the perils of domestic space, including The Art of Protective Coloration and The Domestic Boobytrap.  Her photomontages and photo-text pieces have been published in many journals including Heresies, The Independent, Social Text, Public Culture, ReThinking Marxism.  She has initiated a series of curatorial projects in film and video including  State of Emergency (first iterated as a public video projection),  Border-Crossers and Trouble-Makers for the 2008 Oberhausen Film Festival, Reclaim the Future at the 2009 Subversive Film Festival in Zagreb, among others.  She is co-producer of Disruptive Film & Video: Everyday Resistance to Power, a new history of radical/ experimental short film and video (Facets MultiMedia).   Her collaborative photo-text series, Notes from Europe was published as Capital’s Greek Cage by Autonomedia (2014).  Her video Rock the Cradle (2013) has been exhibited in Barcelona, in Thessaloniki, Greece and Pori, Finland (at the It’s the Political Economy, Stupid exhibitions), and in Glasgow and Edinburgh, Scotland (at the Economy exhibitions).  Excerpts of her ongoing photomontage series No Respirator Included were published in Printed Project (Dublin, Ireland).  Her work is featured in such books as The M Word, Feminist Art and the Maternal; Space, Site, and Intervention: Issues in Installation and Site-Specific Art; in Digital Desires, in Re-Framings: New Feminist Photography.  Her situationist films are featured in In Situs: Theorie, Spectacle et Cinema (Gruppen Editions). In addition to festival awards for her many films and videos, she has been the recipient of residencies and grants from NYFA, NYSCA, the Jerome Foundation, Long Beach Museum, the Ucross Foundation, Can Serrat, Babayan Culture House, and Light Works, among others.