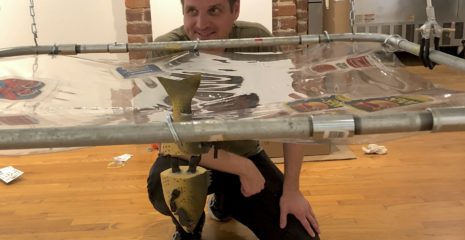 This is a free, public hands-on workshop with Connecticut-based artist and college professor Jeff Ostergren from 1:00 – 3:00pm on Saturday, November 17. In the workshop he will guide participants in making art using Salvador Dali’s Paranoiac Critical Method. The workshop is companion program to Franklin Street Works current exhibition, “False Flag: The Space Between Paranoia an Reason,” which is curated by Ostergren.

“The paranoiac-critical method is a surrealist technique developed by Salvador Dalí in the early 1930s. He employed it in the production of paintings and other artworks, especially those that involved optical illusions and other multiple images. The technique consists of the artist invoking a paranoid state. The result is a deconstruction of the psychological concept of identity, such that subjectivity becomes the primary aspect of the artwork.” (Wikipedia)

“It was defined by Dalí himself as ‘irrational knowledge’ based on a ‘delirium of interpretation.’ More simply put, it was a process by which the artist found new and unique ways to view the world around him. It is the ability of the artist or the viewer to perceive multiple images within the same configuration.” (Humbolt State University)

False Flag: The Space Between Paranoia and Reason is a group exhibition that investigates the continuum of paranoia, as subject matter, philosophical position, and psychological state. Videos, sculptures, paintings, and photographs utilize paranoia as a visual representation and a means of production. The works and the way they are installed produce a kind of looping paranoid state of multiple voices, perspectives, and possibilities, leaving the viewer to establish their own position within this continuum. Exhibiting artists: Darja Bajagić, James Benning, Theodore Darst, Violet Dennison, Michael Green, Mark Flood, Juliana Huxtable, Harry Dodge and Stanya Kahn, Daniel Keller, Son Kit, Tim Trantenroth, and Melvin Way. READ MORE