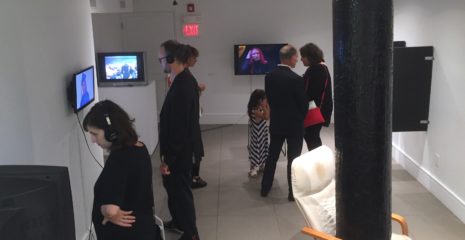 Franklin Street Works opened the group show “I hear it everywhere I go” on the occasion of our annual fundraiser party, Sept 16h. In keeping with our receptions being free and open to the public we are having a public reception and tour mid-way through the show’s run on November 11 from 5:00 – 8:00 pm. The event will include a casual artist walkthrough at 6pm with curator Terri C Smith and exhibiting artists, including Jen DeNike and Michael Blake.

“I hear it everywhere I go” is a group exhibition that includes sculptures, text works, installations, and videos ranging from 1995 to today.  The show aims, in part, to explore dissatisfaction around the pursuit of the American Dream and how it is expressed. The curatorial premise was inspired by artist Cady Noland’s (b. 1956) writings on and stated thinking about the American tendency to express violence through socially acceptable release valves such as figuratively “trashing” celebrities on the one hand and conning or preying on populations outside of dominant power structures – often in the name of entrepreneurship – on the other.

The exhibiting artists exponentially expand on and add to the show’s themes through a variety of strategies, including: performed fictions that resituate celebrity and commodity culture; collaborative text pieces that give institutionally marginalized voices visibility; appropriation of pop culture to explore the isolation of fame; the mining of distinctly American signifiers such as varsity sports and daytime TV talk shows; and juxtapositions of post-consumer objects that read on multiple levels and often indicate how a person’s race, class, gender, and sexuality can position them in a simultaneous state of hypervisibility and invisibility in American culture.