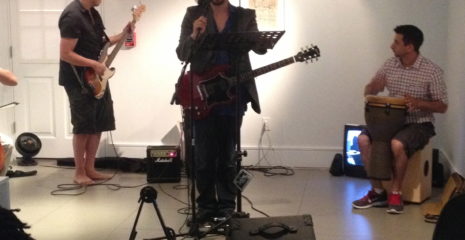 Kent “Wood” Evans, who has performed internationally at venues such as the Acadamie Beaux Arts in Paris and the Nuvorican Poets Café in Greenwich Village, will be at Franklin Street Works for a free impromptu performance while he is visiting his hometown of Stamford, Connecticut. The event is this Saturday, July 12 from 4:00 – 6:00 pm. It will feature Evans sharing songs from his new album from 4:00 – 5:00 pm followed by a short Q &A and a reception with the writer and musicians in the Franklin Street Works café.

Evans performed at Franklin Street Works in 2012, reading from his critically acclaimed book “A Crash Course on the Anatomy of Robots.” For this event he will present a sneak peak of his video for “Too Many Nights @Nuyorican,” which is seven minutes in length and will debut at the Guanajuato International Film Festival July 31st. The author, musician and filmmaker will also perform several tracks from his new album with Dust Industry, which is his self-described “Mexican spoken word, stoner rock project” that features Evans on guitar/lyrics, Michael Severens on cello, and Drew Trudeau on bass.

Half Cantonese and half UK, Kent Evans was born in New York City in 1975 and grew up between New York, Connecticut, and Rhode Island.

He graduated in psychology and dramatic literature from New York University, and began traveling extensively throughout the U.S., Canada, Mexico, Europe, Asia, and the Caribbean. He is currently based in Guanajuato, Mexico.