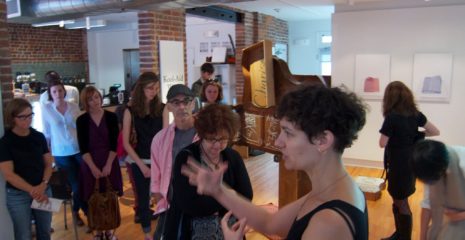 Franklin Street Works presents a guided tour of the current group exhibition, Kool-Aid Wino, with its curator, Claire Barliant, Saturday, September 7. The event begins at 5:30 and we will extend our hours through 7:00 pm for the tour and casual discussion over a thematic, complimentary cocktail.

A Brooklyn-based writer and curator, Barliant has written about art in publications such as Artforum, Art in America, and the New Yorker. This walkthrough will give visitors a rare opportunity to explore the art in Franklin Street Works’ three galleries with the show’s curator in a casual, conversational setting. Barliant will share her thinking on the exhibition’s theme and its artists.  Join us for this free, public event and hear more about the role of trial and error in contemporary art. This event program is made possible, in part, through a two-year grant from the Andy Warhol Foundation for the Visual Arts.

Kool-Aid Wino is an exhibition that explores the foregrounding of mistakes and missteps in contemporary art practices and features works by Anne Carson, Choi Dachal, Frank Heath, Owen Land, Rotem Linial, James Merrill, Alice Miceli, Jenny Perlin, and Aki Sasamoto, as well as an ikat silk suzani textile made in the early twenties. By highlighting or even celebrating errors, the art works in this show redeem flaws, accentuate their value, and open up myriad new possibilities. Barliant explains, “Cumulatively the works reminds us that uniqueness relies on flaws and our imaginative negotiation in, around, and through them.” The title of the show comes from a chapter in the book Trout Fishing in America by Richard Brautigan, who deliberately fudged words while writing in order to invent new ways of saying things. Kool-Aid Wino is on view through September 29, 2013.

Claire Barliant has lived in New York City for the past fifteen years, except for seven months when she lived in Houston around 2004-05. Her various jobs during that time have included stamping words on rubber bands (when she worked for an artist who sold soaps, perfumes, and rubber bands with words stamped on them in upscale shops like Barney’s and Moss), fact-checking for the Village Voice, packing up props for a Wes Anderson film, and numerous editorial gigs at art magazines. Today she writes, edits, teaches, and curates.