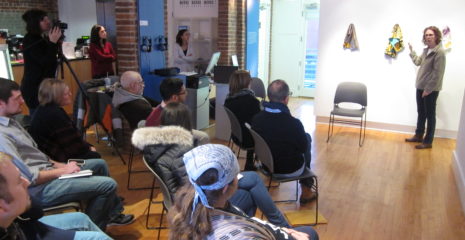 New York artist Leslie Wayne will speak about her work as part of “About Like So: The Influence of Painting” exhibition. The event includes a talk from 4:00 – 5:00, followed by  a casual Q & A and a social gathering in the café from 5:00 – 6:00pm.

Leslie Wayne will speak about her current body of work, entitled Paint/Rags, which are on view in Franklin Street Works’ current exhibition, “About Like So: The Influence of Painting.” At first glance, these three-dimensional paintings appear to be painted fabrics hanging on a hook. In reality, they have no cloth or canvas behind them and are made entirely of paint. The perceptual double-take Wayne creates gives rise to questions about context, about the value of art and everyday objects, and the nature of painting. Wayne will speak about her process, about the symbiotic relationship between process and ideas, and about her personal history that lead to this work.

“About Like So: The Influence of Painting” is a group exhibition that explores how the histories, forms, materials and other qualities associated with painting inform conceptual art practices today. The exhibition, curated by Terri C Smith, aims, in part, to challenge expectations of painting, which are often attached to historic movements, decorative qualities or romantic notions of the artist in his or her studio. “About Like So” features works that use paint in unorthodox ways or bypass the medium all together to reveal how the “language of painting” can invade, obstruct and enhance other art forms. This exhibition asks, “In an era where painting no longer has the art historical primacy it once did, what can it contribute to the dominant art practices of today – art that is often not medium specific and is rooted in the theory-driven practices of conceptual art?”

Leslie Wayne was born in Germany in 1953, and grew up in California. She currently lives and works in New York. Wayne studied painting at the University of California, Santa Barbara, from 1971 to 1973, and she received a BFA in sculpture at The Parsons School of Design. Wayne is the recent recipient of a Joan Mitchell Foundation Artists grant, and has received awards from the Pollock-Krasner Foundation, the Adolph and Esther Gottlieb Foundation, the Buhl Foundation, The New York State Council on the Arts, and the New York Foundation for the Arts. Her work is in the public collections of The Birmingham Museum of Art, Birmingham, AL, the Corcoran Gallery of Art, Washington DC, Fondation Cartier pour d’art Contemporain, Paris, France, La Collection Jumex, Mexico City, Mexico, the Miami Museum of Contemporary Art, Miami, FL, the Neuberger Museum of Art, Purchase, New York, and the Portland Museum of Art, Oregon, among others. Leslie Wayne is represented by Jack Shainman Gallery, New York.