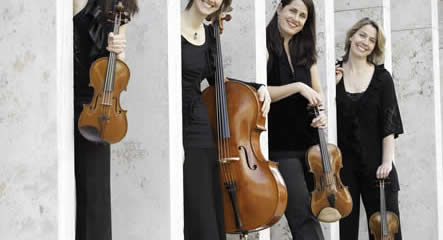 The concert takes place Saturday, May 30th from 7:30-9:00pm at Franklin Street Works and will feature the critically acclaimed Lark Quartet with Yousif Sheronick on percussion. Seats in the intimate upstairs gallery are $25 each, and $10 tickets are available for the downstairs live-feed lounge. Purchase tickets HERE

All ticket holders are welcome at the post-performance discussion with TCMS artistic director Oskar Espina Ruiz and are invited to attend the reception in Franklin Street Works’ café.

The Lark Quartet is an accomplished string quartet that has performed at Carnegie Hall, Lincoln Center, and the Brooklyn Museum’s Sackler Center for Feminist Art. They have recorded more than one-dozen CDs and the Washington Post described their performance as one “of grace, proportion, and burnished brilliance.” The string quartet will be performing new works tailored to art and music audiences who enjoy innovation and experimentation.  The program will include John Adams’ “John’s Book of Alleged Dances,” William Bolcom’s “Three Rags; Nico Muhly’s Big Time,” “Viaggio in Italia.”

The Lark Quartet is known for its energy, passionate commitment and artistry since its inception in 1985. The Lark has performed in many of the world’s great cultural centers including Carnegie Hall, Lincoln Center, The Library of Congress, London’s Wigmore Hall, L’Opéra de la Bastille in Paris, and appeared at international festivals including Lockenhaus, the Schleswig-Holstein Festival, Mostly Mozart, Istanbul Festival, Wolftrap and the Beethoven Festival in Moscow. The Lark has a distinguished tradition of working closely with the country’s most celebrated composers and commissioning new works, many of which have become mainstays of the chamber music repertoire. With a discography comprising more than a dozen CDs, the Lark has recorded for the Decca/Argo, Arabesque, Bridge, ERI, Endeavor, Koch, Point and New World labels. Lark Quartet: Composing America, comprising works by Adams, Bolcom, Moravec and Copland, was released on Bridge Records in 2014 to international acclaim.

About Treetops Chamber Music Society: Treetops Chamber Music Society (TCMS) is the premier chamber music organization in South Eastern Connecticut. Its main concert series takes place at the former art studio of American abstract artist Louis Schanker. Since its founding in 2006, TCMS has presented a stellar roster of international artists, among them the American, Cassatt, Daedalus, Escher and Shanghai Quartets, the New York Woodwind Quintet, and artists from the MET Orchestra. Since 2008, TCMS has also helped nurture some of the most talented young chamber musicians in the country through its J.C. Arriaga Chamber Music Competition and has commissioned new chamber music works by celebrated and up-and-coming composers. TCMS showcases contemporary art, with rotating exhibitions held at each concert.