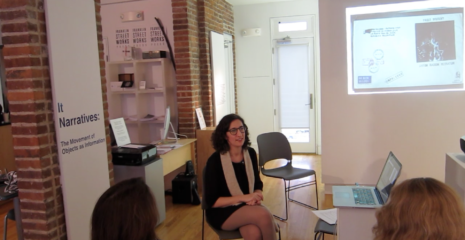 On Saturday, October 18, there is a talk by independent curator Zanna Gilbert and a video screening by artist Lance Wakeling in conjuction with the current exhibition It Narratives: The Movement of Objects as Information. The event is free and open to the public. The talk will be presented from 4:00 – 5:00 pm, followed by a refreshment intermission, and the screening from 6:00 -7:00 pm. Audiences are welcome to join for all or part, depending on their schedules and interests.

Zanna Gilbert will be discussing the history of mail art in relation to the themes of the current exhibition It Narratives: The Movement of Objects as Information (co-curated by Gilbert & Brian Droitcour). It Narratives explores the intersection between modern digital communications media and the traditional postal system.

Video artist Lance Wakeling, whose video A Tour of the AC-1 Transatlantic Submarine Cable is currently on view as part of It Narratives, will present excerpts from his trilogy of essay videos about the physicality of the network. Since 2011, Wakeling has been producing a series of video essays that explores the physical and social landscapes of the Internet.

Zanna Gilbert is a postdoctoral fellow at The Museum of Modern Art (MoMA) in New York and she holds a PhD from the University of Essex and Tate Research in the UK. Her research focuses on artists’ networks and the transnational circulation of art through the mail. She curated the exhibitions Felipe Ehrenberg: Works from the Tate Archive (2009), Intimate Bureaucracies: Art and the Mail (2011), Contested Games: Mexico 68’s Design Revolution (2012), and Edgardo Antonio Vigo: The Unmaker of Objects (MoMA, 2014).