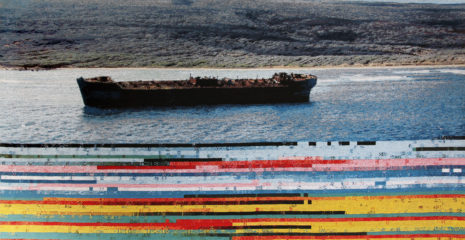 “In this place where the guest rests,”  is curated by Jacqueline Mabey and tackles the pressing issues of nation, place, home, and belonging in a moment of crisis as more people are displaced than any time since World War II. The exhibition is on view January 20 through May 13, 2018 and opens with a free, public reception Saturday, January 27, 5:00-8:00 pm. “In this place where the guest rests” is accompanied by free, public educational programs that include artists talks, as well as a curator tour and curator-led reading groups with Jacqueline Mabey.

“The exhibition was inspired, in part, by the Stamford, Conn. witch trials and the paradox of the ordeal: the “innocent” would drown and the “guilty” would float only to be punished for their alleged crimes,” says Mabey, “Here and now, there are, arguably, echoes of a similar double bind: forced from their homeland by war and poverty, refugees cross the Mediterranean Sea in terrible conditions via unseaworthy vessels. Those who drown are represented in the media as tragic victims, but those who survive the journey are framed as burdensome, unwanted interlopers.”

“In this place where the guest rests” presents works that touch upon vehicles of displacement — war, economics, colonialism and settler colonialism, white supremacy — and what is left in their wake. The works of Ken Gonzales Day, Brendan Fernandes and Jumana Manna allude to memory and its representation, histories that are told, and who has the right to tell them. Yael Bartana and Tanya Lukin Linklater’s works suggest the temporality of displacement as being simultaneously of the past and the future. Christina Battle and Sherry Millner appropriate images from visual culture to throw the realities of displaced people and hegemonic power into stark relief. Works by Addie Wagenknecht and Daniel R. Small touch on economic displacement on personal and global scales.

This exhibition is made possible by a grant from The Andy Warhol Foundation for the Visual Arts and in-kind support from Purdue Pharma L.P.

ABOUT THE CURATOR
Jacqueline Mabey’s work is shaped by studies at Wilfrid Laurier University, McGill University and The University of British Columbia and by multifarious professional experience in commercial galleries, museums and artist studios. Mabey is a co-founder of Art+Feminism, an international, activist curatorial platform based out of The Museum of Modern Art, New York, with satellites at the Los Angeles County Museum of Art; Tate, London; Banff Center for the Arts; MAXXI, Rome; Archives nationales de France, Paris; Smithsonian American Art Museum, Washington, DC; MoCA Detroit, amongst many others. They have curated the work of artists including Jen Liu, Lorraine O’Grady, Hannah Black, Addie Wagenknecht, Lorna Mills, Divya Mehra and Kate Gilmore, and spoken about their work at venues such as Cornell University, The New School, Printed Matter, and Museum of Fine Arts, St. Petersburg. They were named a Leading Global Thinker by Foreign Policy magazine and a Badass Woman by Buzzfeed. Mabey works independently under the honorific, failed projects. They were born in New Jersey, raised in Nova Scotia, and currently live with a small dog by a large park in Brooklyn.