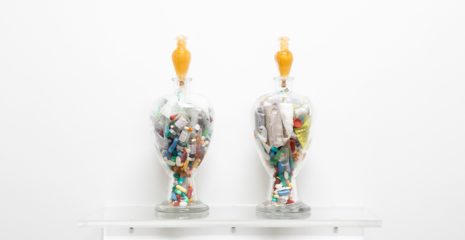 Join us for a panel featuring three exhibiting artists from our current group exhibition “Otherwise Obscured: Erasure in Body and Text” on Saturday, December 14 from 3-5pm at The Ferguson Library auditorium.

The Ferguson Library is at 1 Public Library Plaza, Stamford, CT 06901 GETTING THERE

On view from September 21, 2019 – Jan 26, 2020, Franklin Street Works fall group exhibition Otherwise Obscured: Erasure in Body and Text, is curated by Danilo Machado and explores how tactics of erasure can be used to uphold systems of oppression and colonization, but can also be counterpoints—artists can turn a subtractive act into an additive one, poke holes in the colonizer’s language and logic, and queer temporal spaces and histories. Otherwise Obscured examines relationships between the erasure of text through redaction and illegibility and the erasure of bodies through policy and violence. The exhibition’s title riffs on poet Ángel García’s definition of erasure in the 2019 essay Lessons on Erasure.

Noelle de la Paz is a writer, artist, and all-around storyteller. Her stories are inherited, lived, made up—almost always some combination of the three—and often explore girlness, brownness, languaging, and movements through borders, real and imagined. Her recent work appears in Newtown Literary, Ano Ba Zine, and Elastic Magazine. Born and raised in San Francisco, she now assembles words, colors, and food in her magic lab in Queens.

Alex Dolores Salerno (b. 1994, Washington D.C.) is a conceptual interdisciplinary artist.  Informed by issues of care, interdependency, and the multiplicity of bodies; in their practice Salerno explores the labor of embodiment under capitalism to disrupt the self as singular, legible, linear, and normatively human. Borrowing from the aesthetics of minimalism, the work incorporates conceptual support structures and used objects from the material traces of entanglements both interpersonal and institutional. Salerno received their B.S. in Studio Art from Skidmore College and their M.F.A. in Fine Arts from Parsons School of Design. They have exhibited at Westbeth Gallery (NYC), IA&A at Hillyer (Washington D.C.), The Frances Young Tang Teaching Museum (NY), Amos Eno Gallery (Brooklyn), among others. They are currently participating in the 2019-2020 Art Beyond Sight (ABS) Art & Disability Residency Program. They live and work in Brooklyn, New York.

Noah Fox is a queer contemporary artist from Connecticut currently working at the Aldrich Contemporary Art Museum as the Coordinator of Public and Academic Programs. Fox graduated from Oberlin College with degrees in Studio Art and Art History and received his Master of Fine Art from the Pennsylvania Academy of the Fine Arts. Departing from his early foundations in bookbinding, Fox’s practice has since transformed into an ongoing process of altering and transforming American books published within the last century. The books he chooses are alarmingly misogynistic, homophobic, and racist, and often written and published in the name of education. Through the reclamation of these texts, Fox aims to shed light on the oppressive foundations of American culture while exposing the ways in which these systems and rhetoric persist today.