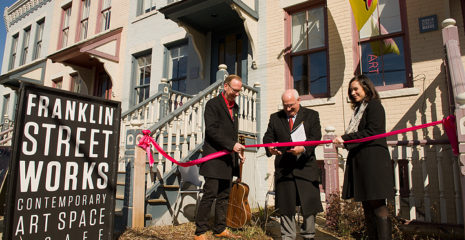 Australian Artist, Jon Campbell, creates his first public art project in the United States for Stamford, Connecticut, as part of the group exhibition “It’s gonna take a lotta love,” which is on view through May 24, 2015. The public is invited to a celebratory ribbon-cutting ceremony for the project’s flags and banners! The ribbon cutting will take place at Franklin Street Works on Thursday, March 19 at 3:00pm and will be followed by a reception in the Franklin Street Works cafe and galleries from 4:00-5:30pm. Campbell’s flags will be on view through June 16, which is also Flag Day.

More than 50 flags and banners will be mounted at Stamford’s public parks, schools and in front of select office buildings, including the Government Center. Jon Campbell’s “four-letter word flags” brightly declare the words Hold, Home, Look, Play, and Yeah. Their presence in the public sphere creates a visual dialogue with residents and visitors going about their daily routines.  Campbell’s works transform everyday words into pictorial objects, prompting viewers to understand the expansive nature of language and how context, scale, and color can change a word’s resonance. By inserting his word flags between country, state, or corporate flags in a city, Campbell prompts passersby to ask which words are worthy of a public format usually saved for pageantry or branding.

Franklin Street Works is also partnering with local public and private Stamford schools to develop educational programs that engage students, including a flag design competition for 7th-12th grade students. The competition will result in the printing and hanging of two winning flag designs in a public ceremony scheduled for late May.

About our Sponsors: This exhibition is sponsored, in part, by The Bacon Family, First County Bank, The Levenson-Bailey-Lupinacci Family, PlowShare Group, Purdue Pharma, SL Green Realty Corp., and Video Data Bank. Jon Campbell’s participation has been assisted by The University of Melbourne, Victorian College of the Arts, and the Australia Council for the Arts.