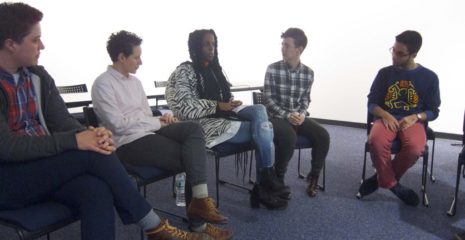 For the Fall 2014 semester, UConn Stamford’s LGBTQ/ALLY Group SPECTRUM has been engaging the campus community in a series of diverse conversations about gender. To continue this dialogue, SPECTRUM, in collaboration with Franklin Street Works, will be presenting a panel discussion that includes four trans*/non-binary identitfied artists Kerry Downey, Leon Finley, Juliana Huxtable, and iele paloumpis on Thursday, December, 4th from 6:00-8:00pm at the UConn Stamford Campus Art Gallery. In addition to the panel, a daylong pop-up gallery of digital works by the participating artists will be on view at UConn Stamford Campus Art Gallery from 1-5pm for those interested in learning more. Two thirty-minute tours will be given at 2pm and 4pm by the organizers of the event before the panel discussion begins at 6:00pm. The installation and event are free and open to the public. The UConn, Stamford, art gallery located at 1 University Place. Stamford, CT 06901.

This conversation comes at a time when SPECTRUM and the LGBTQ community at UConn Stamford have worked to successfully allocate two gender-neutral bathrooms on campus, ensuring that trans* and gender nonconforming students, faculty, and staff feel safe and protected. Many don’t realize that bathrooms are highly gendered spaces, and, as such, places of gender policing. The panel conversation will encourage students think complexly about the ways in which artists use their work as a platform to explore and raise questions surrounding gender identity.

Kerry Downey (born 1979, Florida) is an interdisciplinary artist and teacher based in New York City. Her work is driven by questions of queerness, support, collaboration and the relationship between private emotion and political consciousness. She holds a BA from Bard College and an MFA from Hunter College.  She has recently shown at Taylor Macklin (Zurich), Franklin Street Works (Stamford, CT), CCS at Bard College, Columbia University (NY), Invisible Dog (Brooklyn), A.I.R Gallery (Brooklyn), The Bronx River Arts Center, Spectacle Theater (Brooklyn), and NURTUREart (Brooklyn). Downey’s work received a Critic’s Pick in Artforum, and has appeared The Brooklyn Rail, the New Yorker, and the New York Times. This past June, Downey curated Failing to Levitate at The EFA Project Space with Natasha Marie Llorens. She was a Queer/Art/Mentorship Fellow in 2012-13 and is a current participant in the Drawing Center’s Open Sessions. Downey teaches at the Museum of Modern Art and Hunter College Art Department in New York City.

Leon Finley is an artist living and working in New York City. His work crosses over performance, sculpture and drawing and comes out of one fundamental presupposition: Our bodies are the only way we have of understanding ourselves, and everything that is not ourselves: it is through our body that we perceive and produce, it is what everything comes out of and where everything goes into. His work is concerned with interdependency: The relationships between all kinds of bodies (human, object, architecture, sound, etc.) and the way that things become themselves in relation to other things. Leon Finley studied art at Cooper Union and received his MFA in Sculpture from Yale University in 2012. In 2012 he was the recipient of the Blair Dickinson Memorial Prize and the Dan David Prize Scholarship. He was the 2012-13 Fountainhead Teaching Fellow in the Sculpture and Extended Media Department at Virginia Commonwealth University and currently teaches sculpture at Cooper Union. His collaborative performance work has been presented at various venues around New York City including Movement Research, Center for Performance Research and most recently, the Whitney Museum of American Art as a part of Kevin Beasley’s Public Programing in Sonic Masses.

Juliana Huxtable is a writer, artist, and DJ based in New York City. She is a member of House of Ladosha, a queer artist collective based in Brooklyn, and creator and resident DJ of SHOCK VALUE. She creates and speaks from the positions of cyborg, priestess, witch, and trans girl simultaneously. She is originally from Bryan–College Station, Texas, and graduated from Bard College. Her writing has appeared and been referenced in Artforum, Mousse, Maker magazine, and Garmento. She has read and performed at envoy enterprises, New York, NY; Brooklyn Academy of Music, Brooklyn, NY; Franklin Street Works, Stamford, CT; and Artists Space, New York, NY. Her work will be included in the 2015 New Museum Triennial.

iele paloumpis is a disabled, trans*/queer dance artist, teacher, and intuitive healer. As a life-long dancer, iele feels that engaging in a movement practice can be deeply restorative. Their healing work is rooted in kinesthetic awareness, Tarot, herbal medicine, and some astrological know-how, with a strong commitment to social justice. Their choreographic work has been presented in New York through Movement Research, New York Live Arts, the Flea, Brooklyn Arts Exchange, and Dixon Place, in Pennsylvania at the Painted Bride Art Center, FLUXspace, Studio 34, The Community Education Center, Vox Populi, and the Philadelphia GLBT Arts Festival, in Maryland at the Lof/t, and in Connecticut at Franklin Street Works. iele has had the pleasure of dancing for niv Acosta, devynn emory, Jen McGinn, Emily Wexler and Nina Winthrop, among others. They have served on numerous panels and facilitated discussions centered on issues of identity, perception and performance. In 2010, iele was a co-recipient of The Leeway Foundation’s Art and Social Change Grant. They felt fortunate to be a 2012-13 Studio Series Resident Artist at New York Live Arts, as well as work under the mentorship of Trajal Harrell through the Queer Art Mentorship Program. In 2013, they were a Fall Space Grantee at Brooklyn Arts Exchange, and in 2014 they were in residence at Franklin Street Works with collaborators Joanna Groom and Jen McGinn. At the center of iele’s practice are ideas exploring body politics and artist self-empowerment. For more information visitwww.ielepaloumpis.com.

SPECTRUM is Uconn-Stamford’s student-led LGBTQ (Lesbian, Gay, Bisexual, Trans*, Queer/Questioning) and Ally group. SPECTRUM works to create and promote safe spaces and to engage the campus in conversations about gender and sexuality.

Getting To UConn Art Gallery: The campus is on Broad Street between Washington Boulevard and Franklin Street; officially “1 University Place, Stamford, CT 06901.”  The Gallery is located on the ground level of the building, just past the library. When using GPS to get to UConn’s parking garage, the best address to use is 1194 Washington Blvd, Stamford, CT.

During the regular academic year the Gallery is open from 8:30 a.m. to 7:00 p.m. Monday through Thursday, Friday until 5 pm, and Saturday from 9 a.m. to until noon. Hours are subject to change during semester breaks, recesses and the summer. Please call the Welcome Center with any questions at (203) 251-8400. Admission is free.