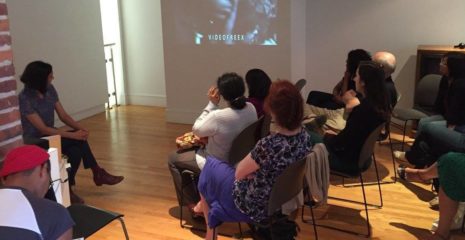 Franklin Street Works exhibiting artist Sunita Prasad discusses past works that use parafictional, narrative, and research-based strategies to illuminate and challenge discourse on gender online, in public space, and in popular culture.  This free, public talk with Q & A is Saturday, July 9 from 4:00 – 5:30 pm at Franklin Street Works.

Prasad, an award-winning artist based in New York City, will discuss her overall body of work, paying special attention to the concepts and processes around her videos that explore gendered experiences in contemporary Indian culture. The talk will contextualize her video “Recitations not from memory,” which is included in Franklin Street Works’ current group exhibition “All Byte: Feminist Intersections in Video Art,” on view through July 10.

“Recitations not from memory” features women’s stories about gendered experiences that were anonymously shared with Sunita Prasad. As part of the conceptual construct for the piece, the artist sought out women who she considered to be her “socio-economic counterparts,” finding them through social media. These stories were then read from a teleprompter by men who Prasad also enlisted via social media. The artist notes that she was interested in this topic as discussions around it become more common in India, “Recitations not from memory is the result of an experiment in listening to, reading, and speaking gendered experience in the Indian context, during a period of increased attention to gender discrimination within Indian public discourse.

This event is generously sponsored by Shelly Nichani.

Sunita Prasad is a New York City based artist and filmmaker. Her projects employ techniques of hybridization between documentary, fiction, and performance to address issues of gender, public space, and the history of social movements. Her work has been exhibited internationally at venues and institutions including the Palais de Tokyo in Paris, Homesession in Barcelona, Torino Performance Art in Turin, Momenta Art in New York City, and Vox Populi Gallery in Philadelphia. She has received awards from the Art Matters Foundation, the New York City Department of Cultural Affairs, and the Warner Bros. Production Fund. She has also participated in residencies at TAJ & SKE Projects in Bangalore, the Contemporary Artists Center in Troy NY, and the Lower Manhattan Cultural Council.