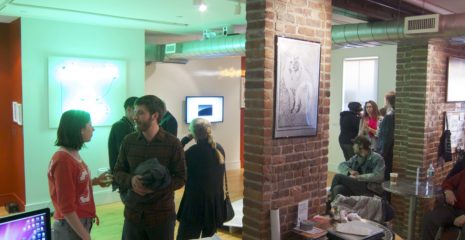 On Thursday, April 24 at 7:00 pm there is a guided tour of the current group exhibition, The Sunken Living Room. Those in attendance will walk through the show with the show’s curator, Terri C Smith, and four exhibiting artists: Michael Bell-Smith, Jonah Emerson-Bell, Danna Vajda and Constantina Zavitsanos. While touring the three galleries, artists will discuss their works, including how videos and installations reflect themes in the exhibition and fit in with their overall practice. The evening will end with an open discussion and reception in the café. Please join us for this free event that is open to the public – a unique opportunity to explore the current show with emerging figures in contemporary art!

ABOUT THE PARTICIPATING ARTISTS

Jonah Emerson-Bell is a sculptor who lives and works in Brooklyn NY. By using a variety of materials including found objects, bronze and neon, his work deals with themes ranging from history to humor, from economy to witchcraft. He was part of the Shadow Shop exhibition at the San Francisco Museum of Modern Art and his work was featured on the cover of the summer 2010 issue of Bookforum. He was involved in the Music Box project in New Orleans in 2011.

Constantina Zavitsanos is an artist whose practice engages the sculptural surfaces and temporalities of performance, text, projection and sound. She works with concepts of intimacy, consent, and contraction–especially as related to debt and dependency. Zavitsanos attended the Whitney Museum Independent Study Program, and has shared work at Slought Foundation in Philadelphia, with Cage at MoMA PS1, and at the Hessel Museum at Bard College.