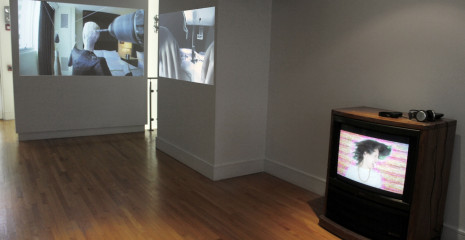 Franklin Street Works, University of Connecticut-Stamford’s Women’s Gender and Sexuality Studies Program, and Sacred Heart University’s Masters of Film and Television Program have collaborated to co-curate “All Byte: Feminist Intersections in Video Art”, an exhibition of video works informed by intersectional feminist approaches. The exhibition will be on view at Franklin Street Works from April 9 – July 10, 2016. Opening reception is Saturday April 9th from 6:00 – 8:00 pm with a member VIP preview from 5:00 – 6:00pm.

Feminist conversations and scholarship around the inseparability of class, race, country of origin and other factors when contemplating gender are reflected in artworks that, among other things, encourage viewers to listen across difference and explore matrixes of power. Through a call for submissions, the curators also sought out emerging artists in order to explore “fourth wave” feminist approaches to video and film. “All Byte” features works made between 2013 and 2015 by nine artists or collectives: Michelle Marie Charles, INVASORIX, Kegels for Hegel, Sarah Lasley, Nicole Maloof, Virginia Lee Montgomery, Sunita Prasad, Legacy Russell, and Maryam Tafakory. This original exhibition is co-curated by the Program Director of Sacred Heart University’s Film and Television Masters school, Justin Liberman; Director of Women’s, Gender, and Sexuality Studies at the University of Connecticut-Stamford, Ingrid Semaan; and Franklin Street Works’ Creative Director, Terri C Smith.

The term “intersectionality” was coined by feminist legal scholar and critical race theorist Kimberlé Crenshaw in 1989. This analytic frame aimed to disrupt the approach of “single axis analysis,” which treated race and gender as mutually exclusive. Instead, intersectional work looks at how social factors and systems of power interlock and shape each other. The “All Byte” co-curators chose videos that exhibit an understanding of intersectionality and a sophisticated or fresh use of the medium. When taken as a whole, these works address gender in concert with many other factors, including: exploring the queer body through a transformative journey; queering of influential, usually white male, theorists through song; placing the alienated female body in surreal parallel to the predominantly white, male tech industry; addressing the contradictions between the lyrics and images in hip-hop videos that often portray women as sexual props; recounting academia’s gendered power structures through parody and art history; exploring inaccurate, race-based assumptions about citizenship and experience; unearthing colonial histories, preserved in the street signs of a small American neighborhood; gender based medical practices; and more. Through the intersectional feminist lens, these artists shed light on systems that reinforce dominance to the exclusion of others and create narratives of inclusion and understanding.
This exhibition was sponsored, in part, by Connecticut Department of Economic and Community Development Office of the Arts.