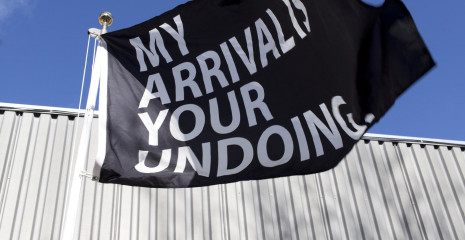 The history of Stamford inspired the curatorial concept for In this place where the guest rests. Though less well-known, Stamford held its own witch trials in the late 17th century. As in Salem, MA, the accused were subjected to the water test, wherein they were stripped and bound and thrown into a body of water. The rationale for this method of interrogation was that water was so pure an element that it would repel the guilty. Ordeal by water is a test impossible to pass: the “innocent” would drown and the “guilty” would float to the surface, only to be subject to punishment for their alleged crimes. Here, we can see similarities to a contemporary double bind, the ordeal by water faced by one million Syrian refugees, displaced from their homeland by war and forced to cross the Mediterranean Sea in terrible conditions upon unseaworthy vessels. Drowning is common, and those who survive the passage find themselves subject to increasingly hostile European publics and governments.

We came from the sea, but it is a home to which we can never return. The concept of home, the delineation of its denizens and the identification of a given Other as a threat to the home(land) undoubtedly drives the rise of nationalist parties in Europe, United Kingdom, and in the United States. The works gathered together in In this place where the guest rests reference displacements from home due to war, colonialism, and economic shifts. In forms speculative and documentary, the works highlight the materiality and temporalities of cultural trauma and the fraught power dynamic between host and guest. In this place where the guest rests interrogates the idea of home as a neutral concept, demonstrating instead how it is something we enact, contest, and carry around with us.