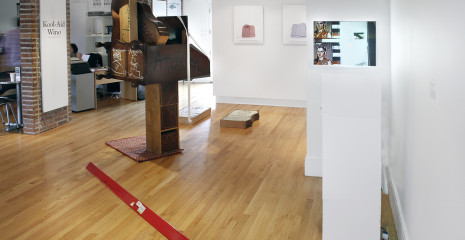 Franklin Street Works is proud to present Kool-Aid Wino, a group exhibition curated by Brooklyn-based writer and critic Claire Barliant. The exhibition explores the foregrounding of mistakes and missteps in contemporary art practices and features works by Anne Carson, Choi Dachal, Frank Heath, Owen Land, Rotem Linial, James Merrill, Alice Miceli, Jenny Perlin, Aki Sasamoto, as well as an ikat-dyed silk suzani from the Middle East made in the early twenties. It is on view at Franklin Street Works from July 20 – September 22 with a free, public reception on July 20 from 5:00 – 8:00 pm.

The show starts with the widely accepted premise that artistic process relies on trial and error. You try something, you mess up, you move on. But what if you stay with that mistake, or that troubling passage, and make it the focus? What if you let it be awkward, an irritant, wiggle it like a loose tooth or pick at it like a scab that never quite heals? What if, instead of being one (quickly deleted) step toward success or resolution, the error becomes the climax and the denouement—an end point in itself, or even a goal? Hence the title Kool-Aid Wino, which comes from Trout Fishing in America by poet and author Richard Brautigan, who deliberately fudged words while writing in order to invent new ways of saying things.

The artists in Kool-Aid Wino poke and prod at systems—be they technological, linguistic, musical, or administrative—until they find or create a chink or flaw that sheds light on the whole. Jenny Perlin’s three-channel video projection, Sight Reading, presents three different pianists on each screen, each struggling to play a composition they are seeing for the first time. Choi Dachal’s photographs feature dress shirts that have been pressed, cleaned, and folded. Yet on close inspection they prove to be two different shirts with slightly varying patterns that have been buttoned together and folded to look like a single shirt. Owen Land, Rotem Linial, and Alice Miceli take a reflexive approach to film and photography, revealing and reveling in glitches and mechanical failures. Frank Heath and Aki Sasamoto disassemble objects to point out ruptures in systems such as urbanism and history that, while abstract, are often deemed airtight and error-proof.

Errors, as Freud demonstrated in his writings on parapraxis (slips of the tongue), often tip others off to our secret aversions or buried desires, which we strenuously try to conceal. By highlighting or even celebrating errors, the art works in Kool-Aid Wino redeem flaws, accentuate their value, and open up myriad new possibilities. The last line of the pseudonymous chapter in Brautigan’s book reads: “He created his own Kool-Aid reality and was able to illuminate himself by it.” In a sense, each of the artists in this show creates his or her own Kool-Aid reality. Cumulatively the works remind us that uniqueness relies on flaws and our imaginative negotiation in, around, and through them. It is also worth noting that Trout Fishing in America famously ends with the word “mayonaise,” a typo that may not have been intentional, but made it into the final draft.

About the curator: Claire Barliant has lived in New York City for the past fifteen years, except for seven months when she lived in Houston in 2004-05. Her various jobs during that time have included stamping words on rubber bands (when she worked for an artist who sold soaps, perfumes, and rubber bands with words stamped on them in upscale shops like Barney’s and Moss), fact-checking for the Village Voice, packing up props for a Wes Anderson film, and numerous editorial gigs at art magazines. Today she writes, edits, teaches, and curates.