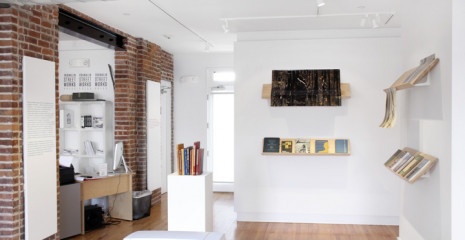 The newest contemporary art exhibition at Franklin Street Works is structured via a string of invitations. Three participants were invited by the art space with the understanding that they, in turn, would ask a collaborator to join them – a framework that encourages improvisation, experimentation and exchange.

Titled Strange Invitation (also the title to a Beck song), this show brings together three, collaborative teams that will design engaging installations, programming, and interactive hubs encouraging direct audience involvement. Strange Invitation, consequently, also invites the audience to participate in a manner that extends beyond that of a passive viewer. The exhibition asks questions such as: “What happens when you invite an artist who defines him/herself as both social activist and organizer to do a project at a gallery space?” “How do projects evolve and surprise if you then ask those participants to invite a collaborator?” “What is revealed and what is obscured through collaboration itself?” “How can this exhibition yield knowledge about social practice and audience engagement that will inform Franklin Street Works’ activities moving forward?” Strange Invitation is on view at Franklin Street Works from April 6 – June 16, 2013. The show will open with a free, public reception, Saturday, April 6 from 5:00 – 8:00 pm. This exhibition is made possible, in part, through the support of a two-year grant from the Andy Warhol Foundation for the Visual Arts.

With Strange Invitation, Franklin Street Works continues to blur the boundaries between participation and creation through collaborative projects. Each component reflects a mix of art and activism, addressing themes informed by the participants’ in-depth work with local communities. Those who were invited by Franklin Street Works to participate are: Andrew Beccone, founder of the Reanimation Library in Brooklyn, NY; artist, activist, community organizer, and founding director of Smack Mellon, Andrea Reynosa, Narrowsburg, NY; and, based in Brooklyn, New York, Stephen Zacks, an urban writer/critic and artistic director of the Flint Public Art Project. Each one of these collaborators has invited artists, curators, and/or civic activists to join them. For the Franklin Street Works branch of the Reanimation Library, Beccone asked Pradeep Dalal to make new works using books from the Library’s main branch. Andrea Reynosa is organizing the Franklin Street Works Heritage Garden and Farmstand and invited ecoartspace curator Amy Lipton to create a gallery exhibition that expands on themes surrounding the natural environment and sustainability in the show’s “Digging Deeper” component. Highlighting artists he’s worked closely with in Flint, Michigan, Zacks invited the artist collective “Flower Tour” to create installations and projections that highlight the group’s past performances.
Through its structure and range of participants, Strange Invitation brings multiple and variously informed viewpoints to the exhibition — all steeped in an understanding of how contemporary art can interface with grass roots, community-oriented projects. In addition to their knowledge of contemporary art, Franklin Street Works’ collaborators inform the show via their knowledge of urban planning, library science, and environmental activism, making this exhibition one that connects contemporary art with themes surrounding the natural, urban, and organizational environments in our daily lives.

Reanimation Library
1. Franklin Street Works invited Reanimation Library founder Andrew Beccone to participate in Strange Invitation.
2. Andrew Beccone asked artist Pradeep Dalal to make works for Franklin Street Works’ branch of the Reanimation Library.
Franklin Street Works will host the ninth Reanimation Library off site branch, which extends the reach of its Brooklyn-based main branch into new communities. The Reanimation Library is a small Independent Presence Library, meaning a non-circulating collection that exists in the physical world. It is open to the public and is meant to inspire the production of new creative work. Reanimation Library features a collection of books that have fallen out of routine circulation and are acquired for their unique visual content. Outdated and discarded, they have been culled from thrift stores, stoop sales, and throw-away piles to be given new life as a resource for artists, writers, cultural archeologists, and other interested parties. “I consider the library itself to be an ongoing collaborative artwork that is activated by people who engage with and use it,” Andrew Beccone explains. Since 2006, the library has been situated in Proteus Gowanus, an interdisciplinary gallery and reading room in Brooklyn, NY.
Since 2009, Andrew Beccone has created branch libraries that are temporary site-specific manifestations of the Reanimation Library. This allows the library to exist outside of its Brooklyn home, giving the possibility of others to engage with its content. Each branch library contains a collection of books that has been gathered from sources in its local community. A free scanner and photocopier will be provided to allow visitors to use the books as resource material for their own creative projects.
For Franklin Street Works’ branch, the library will feature approximately 40 books found in Connecticut as well as Reanimation Library inspired artworks by New York based artist Pradeep Dalal. An artist and writer, Dalal’s work was recently included in exhibitions at Higher Pictures in New York, the Herter Art Gallery in Amherst and at Aljira Center for Contemporary Art in Newark. He has also exhibited at New York venues, including the New York Public Library, Orchard, and ps122 Gallery. Dalal’s reviews and interviews have been published in ARTWURL, Teaching Photo, Village Voice, and EGO Magazine. He is a recipient of the Tierney Fellowship, and has an MFA from ICP/Bard College and an MArch from MIT. Dalal works at the Creative Capital | Warhol Foundation Arts Writers Grant Program, and is on the faculty at the International Center of Photography in New York.

Digging Deeper
1. Franklin Street Works invited Andrea Reynosa — artist, activist, and founding director of the alternative art space Smack Mellon to participate.
2. Andrea Reynosa invited ecoartspace curator Amy Lipton, who is collaborating with seven artists on an indoor/outdoor exhibition for Strange Invitation.
Digging Deeper focuses on sustainable agriculture, entrepreneurship, and artists who create projects informed by our relationships to natural environments. The exhibition and programming involve several components: An outdoor artist studio and greenhouse created by Simon Draper as part of his Habitat for Artists (HFA) project where artists Draper and Michael Asbill, in partnership with the Hudson Valley Seed Library, will germinate seeds and build a small food garden; The Franklin Street Works Heritage Garden and Farmstand conceived and coordinated by Andrea Reynosa, which is a civic ecology investigation into local youth, regional watershed/foodshed awareness, heirloom crop production and entrepreneurship; and a gallery exhibition curated by ecoartspace curator Amy Lipton, featuring works by Habitat for Artists, Joan Bankemper, Andrea Reynosa, Jenna Spevack, Elaine Tin Nyo, and Linda Weintraub.
With the Digging Deeper exhibition, inventive projects around agriculture from greenhouses to urban furniture gardens to canning and color-coding vegetables to making cheese from goat’s milk will populate Franklin Street Works’ downstairs gallery and back yard. Some of the projects address farming as both activism and art form. Artists in this exhibition are known for bringing community-specific issues into their work.
A key component to the exhibition will be Andrea Reynosa’s project Franklin Street Heritage Garden and Farmstand in the Stamford community.Andrea Reynosa is an artist-farmer who actively aims to rally citizens to spark an interest in food production and to offer ways to get people involved. Reynosa’s project Franklin Street Heritage Garden and Farmstand, takes inspiration and instruction from her Big Eddy Farmstand project in Narrowsburg, New York, 2012. The Franklin Street Heritage Garden and Farmstand will focus on mapping the food-shed of the Stamford region as a curatorial tool for garden and farm stand development with an overlay of youth workforce development, heritage food investigation and production, creation of a marketing identity and sales strategy.

Flint Public Art Project and Flower Tour
1. Franklin Street Works invited Stephen Zacks, executive director of the Flint Public Art Project and a reporter, theorist, and cultural producer based in Brooklyn, New York.
2. Stephen Zacks invited the artist collective Flower Tour to create sculptures and installations for Strange Invitation.
Flint Public Art Project (FPAP) has invited Flint-based artist collective Flower Tour to exhibit their work in Stamford, Connecticut as a part of Franklin Street Works’ upcoming Strange Invitation show. Flower Tour is a collective of young artists using public appearances and handmade objects to create excitement in the city. They design colorful paper hats, ceramic rings, and structural dresses, installing them in underused spaces, and donning them as instant fashion boutiques, creating immersive environments animated by their presence. Members of Flower Tour arrive wearing brightly colored flowers as hats, which they exchange and photograph with people they meet, and install custom displays to sell inexpensive multiples and specialty designs in the form of Bloom: The Traveling Shoppe.
For Franklin Street Works’ Strange Invitation, Flint Public Art Project and Flower Tour collaborate in an ongoing series of programs including crepe-paper flower installations in a gallery and storefront, video projections, interviews with the artists, meetings and workshops with community members, public appearances by Flower Tour, and a presentation by FPAP Executive Director Stephen Zacks. As a series of critical, entertaining, and economic activities, the collaboration will exchange and publicize information, connect networks, and share resources between Stamford, Flint, and New York.
Strange Invitation’s generous in-kind donors are Stamford based Green UP and Hotel 0 Degrees as well as the Hudson Valley Seed Library.