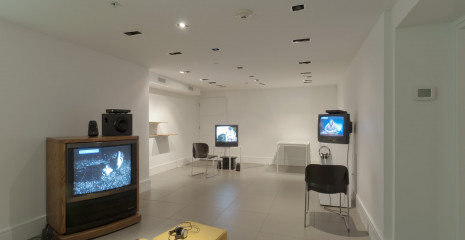 Franklin Street Works presents the original exhibition Working Alternatives: Breaking Bread, Art Broadcasting, and Collective Action, on view from October 27, 2012 – January 13, 2013. The exhibition looks at three threads of alternative art space histories and examines how engaged, inclusive strategies are still being used to break down perceived barriers between contemporary art and its audiences. The themes covered in Working Alternatives are conviviality and food, artists who use media (newspapers, television, and radio) as platforms for artworks, and artist collectives in the US, explored through an open archive gathered specifically for this exhibition.

Originally Working Alternatives was designed to be the backdrop for our first annual fundraiser, but Franklin Street Works is postponing that event until the spring so the indoor/outdoor extravaganza will coincide with warmer weather and have less proximity to long-standing regional art events. If you saved the date for our fundraiser, however, don’t despair and keep Saturday, October 27, on your calendars – there is still a party! Working Alternatives will open October 27 with a free, public reception from 5:00 -8:00 pm. The evening will include a lively performance of San Francisco artist Tom Marioni’s “Beer Drinking Sonata (for 13 Players)” where thirteen people will create music by blowing into beer bottles based on Marioni’s score.
For Working Alternatives, curators Mackenzie Schneider, Terri C Smith, and Jess Wilcox explore three threads of alternative art platforms and production: conviviality and food as components in alternative art space programming and mission (Wilcox); artists using media such as radio, television, and newspapers as alternative venues for presenting work (Schneider); and artist collectives presented in a living archive with weekly changing exhibitions using archive materials (Smith). In addition to historical examples, the exhibition also includes original artworks by contemporary artists that reflect and expand on the showʼs themes. Working Alternatives’ artists include: Paul Branca, Jaime Davidovich, ESP TV, Group Material, Ann Hirsch, Alison Knowles, Tom Marioni, Anna Ostoya, Legacy Russell, Chris Sollars and Jerome Waag. Artist collectives involved will constantly evolve and grow, they include: Basekamp, Conflict Kitchen, Fierce Pussy, Howling Mob Society, JustSeeds, M12 Studios, Paper Tiger, Philly Stake, The Pinky Show, Second Front, SubRosa, Temporary Services, and W.A.G.E.

Franklin Street Works is also excited to collaborate on several off-site artworks, including the live radio broadcast of an Ann Hirsch performance on WPKN, Bridgeport, and collages by Anna Ostoya in the Stamford Advocate via four, monthly ads during the show’s run.

BREAKING BREAD
In the upstairs gallery next to Franklin Street Works’ café, curator Jess Wilcox presents creative and alternative projects that involve gathering and communing with food and beverages. This “Breaking Bread” theme imagines the kitchen table as an alternative space, presenting contemporary participatory, culinary art projects in juxtaposition with several 1970’s food art projects. According to Wilcox, “This thread of the show traces conviviality as a key characteristic that emerged from and continues to be central to alternative art practices. These artists use food’s dual nature as something that both equalizes and distinguishes as means to explore ideas of collaboration, collectivity, individuality, and community. Food unites us as humans in need of sustenance, but also divides and marks us culturally and politically.” Paul Branca, Tom Marioni, Legacy Russell, Chris Sollars and Jerome Waag take on these ideas through works that incorporate food and drink with performance, sculpture, and interactive installations. There are also several collaborative food-related events in the works. Check out Franklin Street Works’ website in November and December for updates.

ART BROADCASTING
The “Art Broadcasting” segment of the exhibition is curated by Mackenzie Schneider and takes a look at artists that have used media as a way to distribute their work. Local newspapers, radio, and cable access have served as alternative spaces in and of themselves, allowing for the exhibition of work that offers alternative perspectives from the regularly scheduled programming. Beginning with a brief history from the 1970’s to today and then leading to works commissioned by emerging artists, the exhibition will explore media as an unexpected venue for art. Historic examples in the exhibition include videos by Chris Burden, cable access broadcasts produced by Jaime Davidovich, and New York Times newspaper inserts by Group Material.
The contemporary segment of “Art Broadcasting” will include three artworks placed into the Fairfield County region via newspaper, radio, and television. Brooklyn performance artist Ann Hirsch explores the contemporary portrayal of women in the media by inserting herself into popular culture through reality TV shows, Twitter and YouTube. For this exhibition Hirsch will perform on public radio for the first time thanks to Bridgeport, Connecticut’s, independent radio station, WPKN. For the television component, a video shoot featuring ESP TV will take place at Franklin Street Works. Slated for November 10, ESP TV will tape an installment of their nomadic showcase of contemporary and experimental art presenting music, performance, and video art in front of a live audience. Bringing print media into the mix, works by Anna Ostoya will be carried in the Stamford Advocate. Ostoya will create a monthly collage in the newspaper using elements from the newspaper itself, simultaneously responding to and inserting herself into the local context.

COLLECTIVE ACTION
For the “collective action” component of Working Alternatives Franklin Street Works’ team put out a call for materials from artist collectives working today as an informal exploration of that landscape. There are relatively recent examples of exhibitions and projects that overlap in some ways with this archive/alternative space concept, consequently, curator and FSW Creative Director, Terri C Smith, sees this project as one addition to a layered, ongoing investigation – as one exploratory moment that reflects the pulse of creative collective action today. Materials will be presented in an open archive that visitors can explore as part of an immersive installation that includes changing, weekly exhibitions drawn from the archive’s materials. This section of the exhibition was inspired, in part, by Gregory Sholette’s book Dark Matter and PAD/D (Political Art Documentation/Distribution). PAD/D was an activist art group whose stated purpose was, “To provide artists with an organized relationship to society, to demonstrate the political effectiveness of image making, and to provide a framework within which progressive artists can discuss and develop alternatives to the mainstream art system.” The installation will, consequently, also include reproductions of documents from the PAD/D archive as an informative, historical backdrop for the contemporary materials collected by Franklin Street Works.