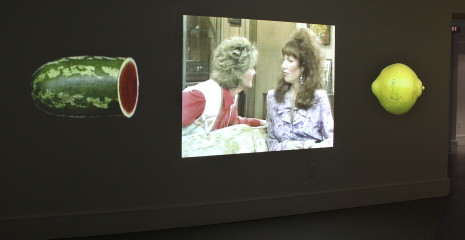 Virtually since television’s invention, artists have used its form, content, and media to create artworks whose intentions range from homage to critique. Your Content Will Return Shortly is a group exhibition that explores how contemporary artists harness the in-between moments of our television experiences. By taking their cues from the physical and functional qualities of television and a variety of elements associated with broadcasting, they touch on phenomena that include: advertising; laugh tracks; the effects of VHS, DVD, and remote control devices on viewing habits; public service announcements; and nuanced observations of the relationship between spectacle and cable news. The exhibition is on view from January 24 – March 24, 2013, at Franklin Street Works with a free public reception on Thursday, January 24, from 5:00 to 8:00 pm. Exhibiting artists include: Christopher DeLaurenti, Eric Gottesman, Jonathan Horowitz, Sophy Naess, Jeff Ostergren, Lucy Raven, Martha Rosler, Catherine Ross, Emily Roz, Carmelle Safdie, and Siebren Versteeg.

With Your Content Will Return Shortly, television is explored as both medium and subject. “Early exhibitions such as TV as a Creative Medium organized by gallerist Howard Wise in 1969 posited that video could be art, and that televisions would become as important to contemporary exhibitions as paint, canvas and other traditional materials,” says the exhibition’s curator Terri C Smith, “This show was inspired by a desire to connect my own research on historic video exhibitions and readings in media theory — including texts by David Joselit and Marshall McLuhan — with observations of our own contemporary relationships with ‘television,’ which for many is streamed at will via a laptop, bypassing the TV set altogether.”

Rather than taking a comprehensive view of television as inspiration in contemporary art, Your Content Will Return Shortly, as the title implies, explores contemporary works that highlight televised elements tangential to the main narrative arc — our “stories”. This exhibition brings to light the physical, stylistic, and economic elements that surround the narrative arcs of situation comedies, melodramas, news features, etc. Exhibiting artists Jeff Ostergren and Marth Rosler focus on advertising in their works. With Global Taste, Rosler creates a three-channel work that brilliantly appropriates food advertisements from the 1980s. In Jeff Ostergren’s two-channel video Stimulus, pharmaceutical ads are deconstructed shifting focus to specific components such as health warnings. Ostergren asserts that the commercials are in fact the true content of our television experience, writing, “Advertisements are vehicles of capital. Despite our understanding of them as the filler surrounding our programming content (news, sporting events, sitcoms), in reality, commercials ARE the content – the programming they surround are sublimated by the lurking capital that funds them, that relates to the content, that is geared towards a target audience, a focus- group-determined viewer.”

Artists Jonathan Horowitz, Sopy Naess, Catherine Ross, Emily Roz, and Carmelle Safdie pull from specific and seemingly unimportant elements from televised narratives, reminding us of the devices such as laugh tracks, physical comedy, and repeated plot motifs that are interwoven throughout. In Roz’s work Death by Mel the artist takes Polaroid photographs of the TV set to capture scenes where actors are killed by Mel Gibson, “Archiving images from films into sub-groups strips them of their original meaning within a narrative and places them into reliable and familiar categories,” writes Roz, “An image of a president immediately brings to mind an entire genre without specifying any one film. Grouping many similar images reminds us of what we come to expect from certain genres and how those devices signal the moviegoer to understand and accept certain pretexts without question.” Similarly, Catherine Ross, who often uses old sitcoms as her material, feels that “Isolating the movements of humans and/or objects, ! create new sequences that reveal an inseparable relationship between motion and sound ! movement reveals an inherent awkwardness, a humor that echoes our vulnerabilities.”

Christopher DeLaurenti, Lucy Raven and Siebren Versteeg pay close attention to the physical and operative aspects of television. With Prop, Versteeg seems to “prop” a plasma screen on the wall with a long stick. The video on the monitor features someone spelling words in the sand with a stick. The first impression of the television is that it’s a sculptural element, followed by its role in conveying a moving image – with this Versteeg actively reverses the viewer’s usual dynamic with the television set. In Remote DeLaurenti’s 2002 performance employs a television remote control and TV set to create an audio work, flipping channels in order to make random sound patterns. Listening to the piece eleven years later, the antiquated sounds of an older technology are surprisingly audible. Mining the history, geography, and mix of commerce and community in cable access, Lucy Raven invents a public service announcement that elucidates the journey from taping to broadcast, including shared land use and other economies. In her work 4:3, a scrolling text reads in part, “The exchange is asymmetrical: images and sound travel from the production studio to the home and into the TV via copper cable wire, and money from the couch potato travels to the cable company via US mail. You can check if your payment went through by turning on your television.”

As Raven’s text implies, Your Content Will Return Shortly looks beyond the screen and asks questions about the cultural circuitry surrounding television as well as its relationship to daily life and contemporary art. Using videos, photographs, Internet, and sculptural elements, the artists in Your Content Will Return Shortly provide insights into the structures and languages of television, reminding viewers that their relationships with the commerce, programming, and operational structures of TV are multifaceted and extend far beyond the living room.